November 10, 2018
It was circa 2000. I was living in Ann Arbor, near the University of Michigan campus. One day, my friend brought a special guest for dinner to our apartment.

That was the first time I met Felipe Ortega. In the short time I've had the good fortune to spend with him, Felipe had a profound impact on me.

Felipe was a man of medium height and slim build. He wore his longish salt-pepper hair in a pony tail. That evening, he arrived wearing a sweatshirt and denims, with a beautiful Apache woven blanket draped on his shoulder. He carried himself with an undefinable dignity and gravity that easily set him apart from the crowd. I am usually enthusiastic to meet new people, but I was a little nervous that evening. However, Felipe's charming manner and delightful sense of humor put all of us at ease pretty quickly.

I learned that he was a master potter, specializing in a pot making technique that is unique to the Pueblo Indians of the Southwest. It uses micaceous clay native to New Mexico, and a time consuming and painstaking method that I can only describe as Hanuman's tail spiral. A brief view of the technique is shown in the video below. So, Felipe was spending that semester, as a visiting professor and master craftsman, at the UofM School of Art and Design, in the pottery department. We had a lovely time at the dinner.

As I passed him a dish at his request, suddenly Felipe asked me, "How do you say thanks in your language?"
I replied rather mischievously, "Thanks is a western concept. In our language, Telugu, if we really mean it, we say something like, I'll peel my skin and stitch sandals for your feet."
After that, for the rest of the evening, Felipe kept repeating that for every little service I did for him, making everyone laugh uproariously. 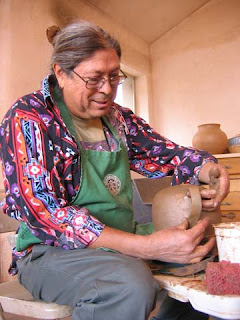 A couple of years later, in the summer of 2002, I was fortunate enough to visit Felipe at his Owl Peak Pottery Studio in La Madera, NM. I had a hotel room in nearby Santa Fe and went to visit him just for the evening. He said, "If you don't have any other business in the city, vacate your hotel and come and stay here." I was glad I accepted.

Felipe lived in a large adobe house in the middle of the desert. He had just enough modern amenities (roof top air cooler, running water, refrigerator) in the house to make life comfortable, but not so much to make people lazy. There was no microwave. The stove was old style wood burning one. Bread had to be baked afresh daily in a wood burning horno. I don't remember exactly, but I think I stayed with him about 5 days. The conversations, the meals, and the experiences he showered on me during that brief period are still vivid in my memory. His home and studio were really like a Guru's ashram. Apart from all his other activities, Felipe provided a shelter and a safe environment to young people who were disowned by their own parents and families for any number of reasons.

Thanks to Felipe's kindness and indulgence, I learned a lot about Apache traditions and arts, and experienced some of it first hand, including a very powerful sweat lodge experience. I observed that he spoke to people according to their level of maturity and understanding. He and I had many lengthy discussions (and some times arguments) about life and enjoyment, spirituality, nature, humanity and divinity. In spite of his fame and personal greatness in multiple spheres, Felipe never put on airs. Moreover, he didn't tolerate such airs from anyone else - you can witness some of that, along with his impish sense of humor in the video below. During my brief stay with him, I saw him cut down to size two arrogant pompous men, and tame one wild young man. Yet, whenever I was face to face with him, I saw and felt waves of compassion pouring out.

I remembered him many times through my life since then, and spoke to him by phone a couple of times, promising to visit him again soon.

Last evening, I was just sitting at home, not doing anything particularly. In that lethargic idleness, I remembered Felipe. Picked up my phone and did a search on his name. A beautifully designed website popped up for Owl Peak Pottery. I eagerly browsed the tab header with Felipe's name. Within a few sentences, something struck me vividly - the text was speaking of him in the past tense.

I found an email contact and sent an email giving my phone number. Within 30 minutes, I received a call from Jimmy Ortega, Felipe's nephew and heir. He confirmed - Felipe passed on earlier this year. Acting on Felipe's directions, Jimmy established Owl Peak Pottery Foundation at Felipe's studio, continuing Felipe's legacy.

Felipe was a true rishi, yogi and guru.

Wallace Boss's video of Felipe demonstrating his art in 2008

అన్యగామి said…
You are absolutely right about native american masters. Once can see the serene composure in the master's face (from the picture). one thing I want to dispute is if Felipe was really an Apache indian.
November 12, 2018 at 5:18 PM