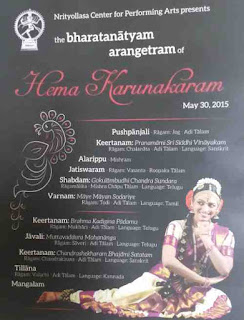 The normal story of an arangetram in the US goes something like this: Girl attends Bharatanatyam (Or Kuchipudi or whatever dance) classes. A few years later, girl is in high school. If she is sufficiently interested and if the dance teacher decides she is sufficiently talented, and if (and this is a big IF) the girl's parents are sufficiently well funded, they do an arangetram. Then the girl goes off to college and forgets all about this. This has been pretty much the norm for the last 20-25 years.

Hema's arangetram story was as different from the norm as possible. During all the time Hema has been learning and performing Bharatanatyam with her guru (and my dear friend) Roopa Shyamasundara, she did not nurture the idea of an arangetram particularly. She finished high school, she finished college - she continued to dance at every opportunity all this time. At the end of it all, before she sets off into the corporate world, Hema decides - let there be an arangetram! When Hema decides, it happens, and boy, what a show it was!

The show followed standard Bharatanatyam Margam, staying true to tradition, with small touches of innovation here and there that added some sparkle. Hema's alarippu in misra nadai gave a good preview of what a solid dancer she is. Jatiswaram in Vasanta ragam was crisp and clean. The traditional Shabdam - Gokulambudhi chandra, was handled with delicacy and the liveliness of little Srikrishna. The Varnam she chose, Maye Mayan Sodariye, in Todi ragam, is also a traditional item. The mood is mainly devotional and Hema performed the complex jathis with clean lines and perfect execution. They could have avoided the isolated delineation of the navarasas in the choreography.

After a brief intermission, the program resumed with an Annamacharya composition, Brahma Kadigina Padamu, in mukhari ragam. Hema enacted the Vamanavatara - Bali story as well as Kaleeya mardanam as part of this. The Javali - Muttavaddura Mohananga in Saveri ragam was a pure delight and showcased the mature grasp Hema had in depicting various characters and various moods in a dramatic setting. This was followed by another keertanam - Chandrasekharam Bhajami Satatam in the raga Chandrakauns, in which the story of Markandeya was enacted. The program concluded with a Tillana in Valaji and Mangalam. 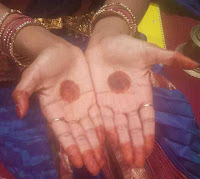 I should mention a beautiful subtle touch Hema added in her aahaaryam .. she decorated her hands and feet with real marudhaani (gorintaaku, mehendi, henna) in the traditional way .. did not use the usual red marker pen or other red stain! Not sure how many in the audience noticed it. A lot of care and thought were put into the production, from the decorations in the lounge that greeted the guests upon arrival to the stage design and decoration - everything was arranged tastefully and in harmony.

Hema's arangetram is a prime example to show the superior product that emerges when the dancer is not only committed to the art, but also superbly talented, and more importantly, mature in age and stage experience to bring out the bhava of each composition. This is what is usually lacking in many arangetrams where the young lady is usually in a hurry to wrap it up along with other high school activities before pushing off to college.

Babu Paramesvaran's majestic voice elevated the mood of the show a couple of notches. The supporting instrumentalists were good. Guru Roopa ran the show efficiently.

Hema graduated from University of Michigan recently with a degree in Engineering and will start working for IBM's Watson Project soon. I should also disclose here that Hema's father, Krishna Karunakaram, was my classmate during undergrad days, and we rekindled our friendship some 15 years later in Michigan.

I wish Hema all the very best in her future. Keep dancing in grace!!

Anonymous said…
happy to know about a true lover/performer of art. It is people of their ilk who keep the traditional flag flying. Fervently hope that Hema continues to perform.

Liked the way you wrote about her. You continue to inspire sir with your unadulterated love for myriad art forms.