June 09, 2014
Sadhana Dance Studio is lovingly maintained by Guru Madhavi Marcia Mai in Ann Arbor, MI, where she teaches Bharatanatyam to students young and old. Madhavi usually hosts a spring recital in the May - June time frame, to showcase the new pieces learned by the students during the previous year.

The 2014 Spring Recital took place on May 31 at the Keene Theater of the Residential College, University of Michigan. It is a very small cozy theater (Just 4 rows - about 60 seats), but a beautiful, fully equipped stage and wonderful acoustics. Therefore, even in a theater setting, the audience was treated to the very intimate and personal nature of enjoying a Bharatanatyam performance. 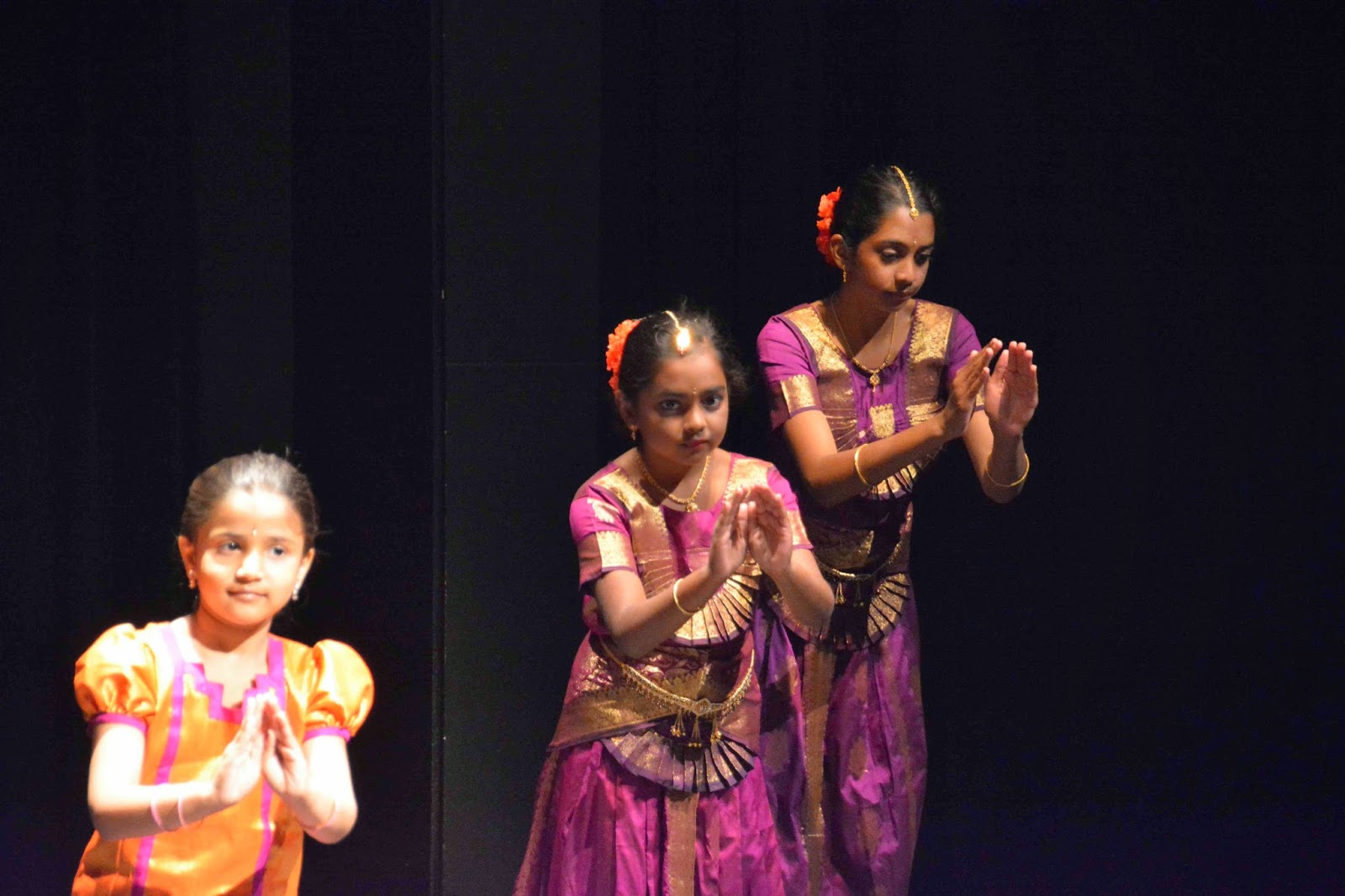 This recital was pretty much organized along the lines of a traditional margam. Started off with traditional benedictions (Mangalam) drawn from Upanishads, set to music: Lokah samstaah .. the first benediction was enacted by all the little ones, while the second one, Asatoma sadhgamaya .. was performed by the cutest duo, Aditi Kandaiah and Maya Sudharsan. This was immediately followed by the traditional Kalakshetra Ganapati Kavutvam, Nataraja dhyana sloka (Angikam bhuvanam) and Alarippu. One can tell how good a dancer is just by witnessing the Alarippu. I have to say that the dynamic duo of Ganga Devaiah and Maya Gianchandani performed with a fine blend of energy and grace.

Another introductory piece, Thodi Mangalam blending into Nataraja Anjali (Ulagellam unarndu) was performed in beautiful unison by the group of five young ones, to the choreography of Madhavi. 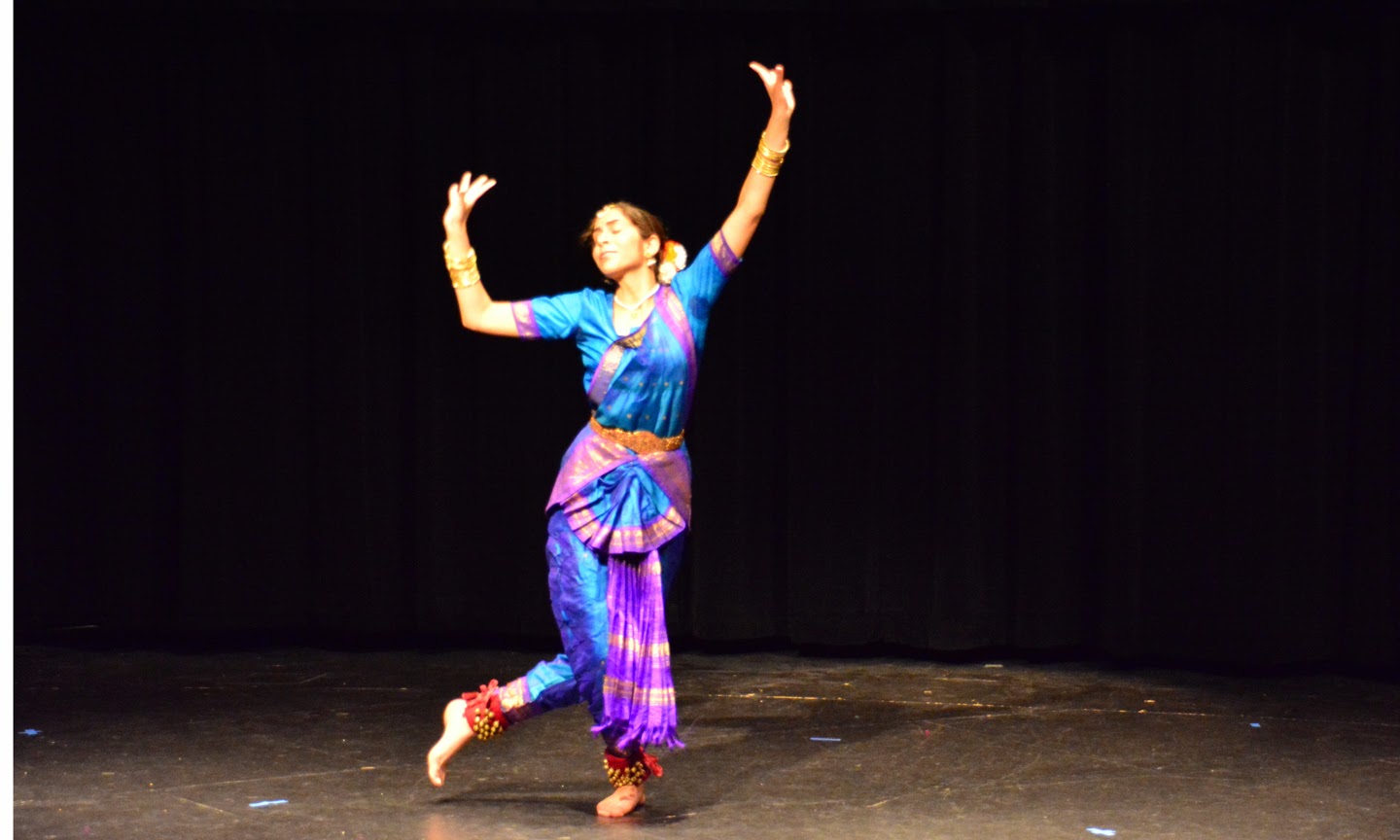 The center piece of the recital was the krithi, Meenakshi memudam, composed in Purvi Kalyani ragam by the great 18th century composer, Muthuswami Deekshitar. This wonderful composition was adapted into varnam format for dance, with suitably complex jathis to introduce and punctuate each lyrical stanza. The lyric is in Sanskrit, in praise of the Mother Goddess in the form of Sri Meenakshi of Madurai. She was born the daughter of a great king and was a great warrior herself. She encounters Siva and challenges him to battle. She realizes his true form when her arrows fall harmlessly about him and agrees to marry him. Siva marries Meenakshi and stays on in Madurai in the form of Sundaresvara. Sri Meenakshi, in the tradition of Goddess worship, is a manifestation of Matangi energy, typically depicted with a greenish hue, holding a parrot. Anyone who had a darshan of Sri Meenakshi deity in Madurai would agree that the Goddess is powerfully irresistible. 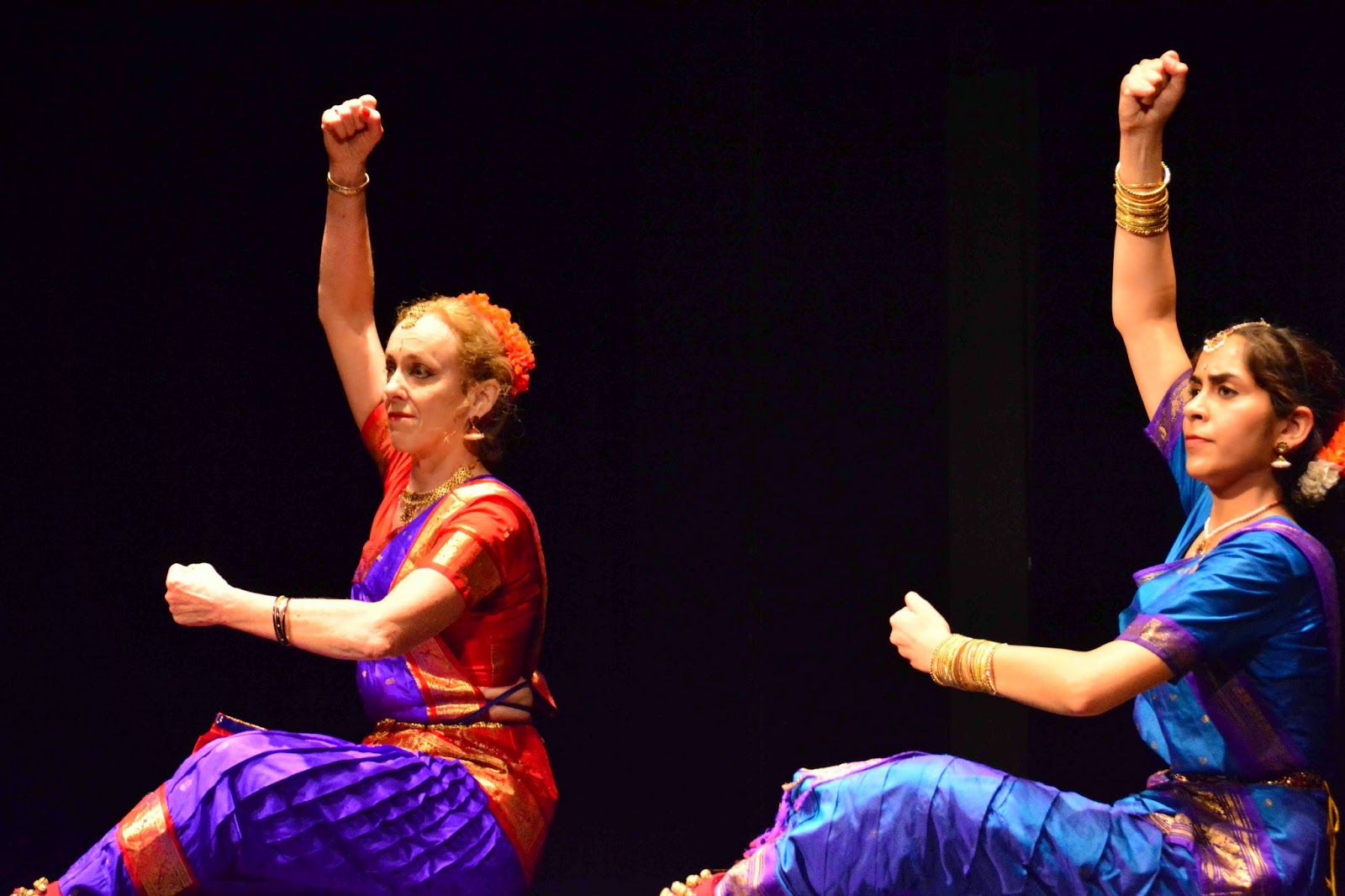 The choreography was developed by Madhavi, with inspiration from her long time friend and wonderful dancer, Navtej Johar of New Delhi, to tell the various tales of Sri Meenakshi through the abhinaya portion. Young Maya Gianchandani excelled in both the execution of the complex jathis and the subtle abhinaya (emotional expression) to depict the various tales.

I have had the good fortune to watch Navtej himself perform this piece at an intimate gathering in Chennai some ten years ago. I remember getting goosbumps, watching this middle aged bearded man bring the most beautiful Goddess to life. On this day, in this land so far away from Madurai, young Maya re-evoked that magical feeling. It was beautiful.

It was a treat to watch an experienced dancer/teacher like Madhavi perform the padham, Bala vinave. This traditional composition in Kambhoji ragam, was choreographed by Rukmini Devi for Kalakshetra syllabus. The heroine complains to her friend how the naughty Krishna, who once enchanted her as his only love, now does not even look at her. The subtle blend of moods from happy recollection of past, jealousy and pangs of separation of the present to the hope for future were gently moving waves on a placid lake. 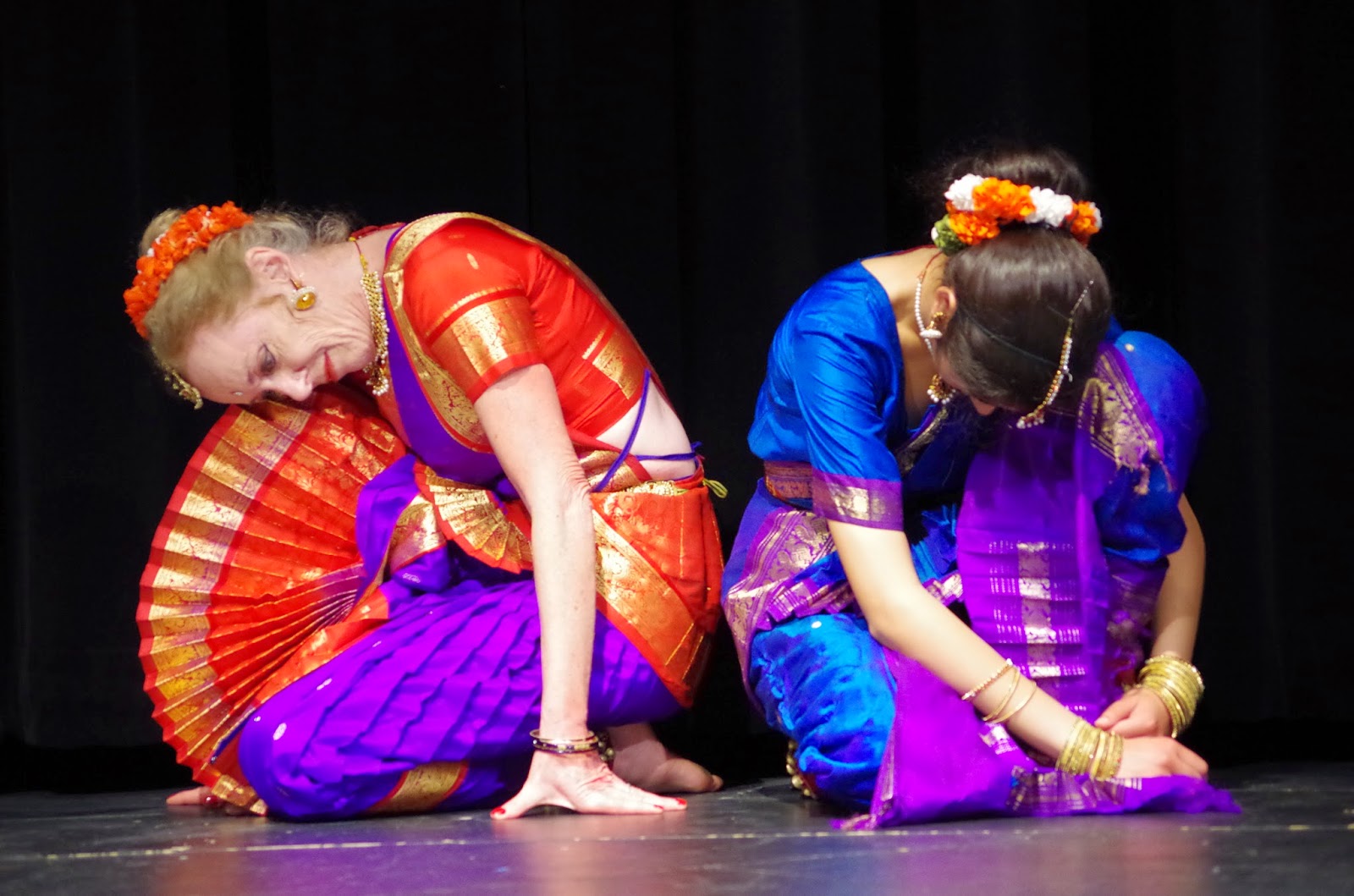 Thillana in Suruti ragam, Madhavi's choreography, was presented by Madhavi and Maya Gianchandani. This was followed by "Give me strength", a poem in English by the great Indian poet, Rabindranath Tagore, set to music, sung and choreographed by Madhavi in the form of a padham, as an evocative expression.

The full student troupe consisted of Maya Behrend, Monica Behrend, Nandini Desaraju, Ganga Deviah,  Aditi Kandiah, Anaka Kothu, Sahana Kothu, Maya Sudharsan and Maya Gianchandani. All of them performed with energy and passion. It was a lovely and satisfying performance to watch. 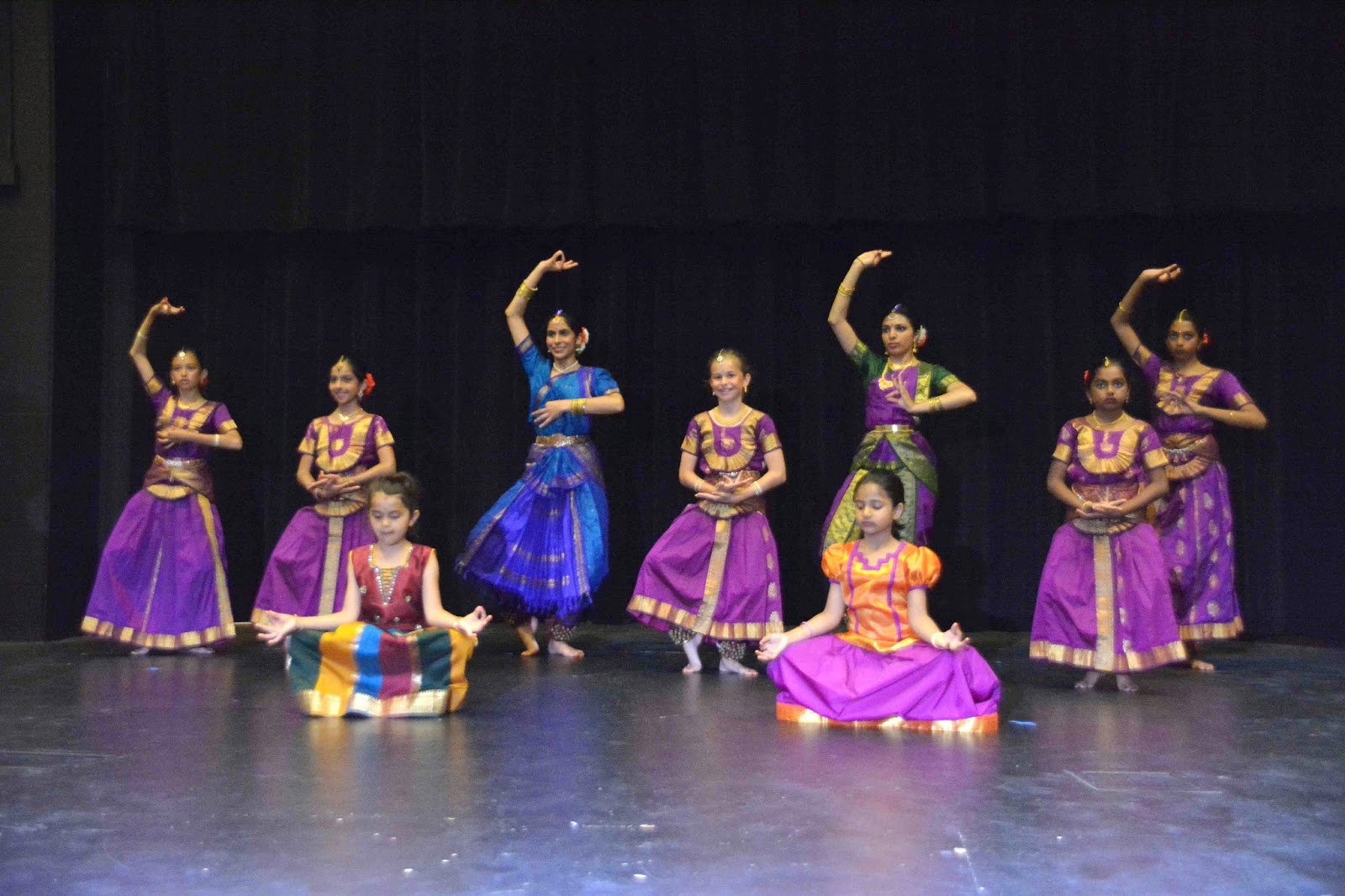 I should disclose here that I have had the good fortune to study Bharatanatyam with Madhavi for over fourteen years at Sadhana, with some breaks in between. Since 2000, this was perhaps the first time that a Sadhana Studio recital took place without me on the stage. I certainly felt that pang, but it was also pleasing to watch all these young dancers do so well.

The proceeds from the donations were given to Amma's Center of Ann Arbor to support various charitable activities.