On January 6, I was sworn in as a citizen of the USA.

Then, I saw a notice for auditions at the Birmingham Village Players for a stage version of the hit movie, Shakespeare in Love. I emailed the theater and got a response from the play's director, Holly Conroy. Holly and husband Bryan (also the producer of the play) were kind enough to accommodate me for an impromptu cold read because my work travel interfered with the regularly scheduled auditions. I received a phone call from Bryan one morning later in January as I was getting ready to drive to my employer's manufacturing plant in Tennessee. I was in!! At that point, I didn't care how big or small my part was. I was just happy to be in a mainstream play, after dabbling in Telugu community theater in the US for over 25 years.

After a flurry of intense rehearsals, we had a free preview for senior citizen patrons (apparently a tradition at BVP) on Wednesday, March 4th and we officially opened on Friday, March 6th. Dear Prasad Josyula flew up from Dallas to attend the premiere and totally overwhelmed me. The premiere show was successful, followed by two more shows that weekend which played to sold out audiences. Thank you, Holly and Bryan! And all the wonderful actors, musicians and crew!! It is not an exaggeration to say that I learned a lot about stage craft in these 10 short weeks. 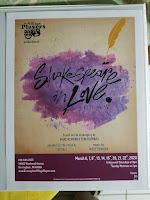 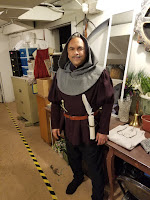 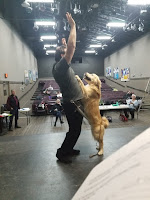 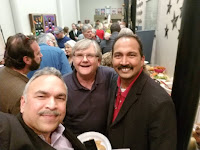 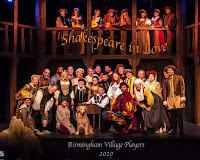 And then, the shutdowns started.

Except for some financial disadvantage and the loss of direct companionship with colleagues at work, I am thankful that the COVID 19 pandemic had very little direct negative impact on my family and I. While I make the above statement, I am deeply aware of the great personal grief suffered by millions of people all around the globe either as a direct result of the disease or due to the indirect results of incompetent and shortsighted decisions by the various governments.

During the early months of the lockdown, I tried to wrap my head around the long term implications of this. There were many hopeful projections from around the globe - accounts of drastic reduction in air pollution, reduction in other measures of consumption around the globe and such. However, as people realized that this wasn't going to go away any time soon, they began to look for alternative methods to amuse themselves. Some forms of material consumption got substituted by other forms of consumption. It appeared to me that human tendencies haven't been changed in any significant way by the COVID 19.

While it closed some doors for social interaction, it opened many other doors, virtual doors literally around the globe. Coinciding with the Telugu (Vedic) new year at the end of March, I started a daily series called Daily Telugu Poem on YouTube. I wasn't sure, when I started, how regular I was going to be with this or how far I was going to carry it. It didn't quite start with any plan, but evolved into a dedicated presentation of poems by US based Telugu poets. After a few awkwardly produced videos hit the YouTube and started gaining some notice on my Facebook wall, my wife took an interest in the project. She not only wielded the cellphone camera, but also began to direct my costume, location, lighting and my recitation. I have to admit (a little grudgingly, perhaps) that her involvement improved the quality significantly. Thank you, Bangaram!

Here is a sample, featuring a poem by Tammineni Yadukula Bhushan

Starting around the same time, my dear friend (తమ్ముడు) Vijaya Bhaskar Rayavaram set into motion a daily evening get together, with a different activity and theme for every day of the week. He aptly named it B+ With Bhaskar. He dedicated Saturday evenings to recitation of short stories. I was very happy to participate in this as a reader, and some times as a guest host when Bhaskar himself wanted to present a story. I also had the pleasure of listening to some professional quality story readings by some of the stalwarts of Telugu radio from India. This is a feature that is still continuing on YouTube. Many congratulations to Bhaskar and best wishes to all the guest hosts and participants for continued success.
A story written by Nidadavolu Malathi garu that I narrated

With enthusiastic help from my young friend Annapurna, I presented a weekly Facebook live series, discussing Telugu American short stories. I hand picked Telugu stories written by authors living in America which featured a significant interaction between an Indian character and non-Indian character. This series garnered a devoted audience on Facebook for the duration of its run (12 weeks), and to my good fortune, also  was favored by each of the writers that I featured. I am thankful to each of them and to Annapurna. This will remain a cherished memory for me for a long time.

Discussion of a story by Susmitha

There have been literary symposia big and small. The biggest of all has to be the Vanguri Foundation's International Telugu Conference. What an event! In terms of global coverage, concept, scope and execution, this is nothing short of a miracle! Starting with the gang leader, Vanguri Chitten Raju, kudos to each and everyone involved in this. I am very glad to have played a small part in this, hosting a two hour segment. And hearty congratulations to Tallavajjhala Patanjali Sastry for being honored with lifetime achievement.

It was gratifying to be invited by Guntur Mahila Kalasala to participate in their 2-day seminar on contemporary Telugu short story. Big thank you to Vijayalakshmi Nallapaneni. I also had the pleasure of presenting the keynote lecture at Veekshanam of Bay area (Monthly Telugu literary meeting) at their October meeting. Thank you to K. Geetha. Yet another very gratifying event was the short story writing workshop that I curated along with Lakshmi Rayavarapu for Canada Telugu Talli and Toronto Telugu Vahini groups.

On the social media front, apart from the usual amusing and enriching interactions on Facebook, two significant developments happened. As if the multiple Whatsapp groups were not sufficient interaction, my batchmates from RECW (now NITW) kickstarted a weekly zoom session. I must confess, this has been one event that truly kept pulling me out every time I tended to sink into the blues, amusing me, motivating me, and in general, keeping me alive. A second event, also on Whatsapp, was the birth of our TAGDV alumni group, thanks to the initiative of Patri Prasad. This group consists of individuals involved with TAGDV from its inception till about 1997-98, created for the purpose of sharing memories and memorabilia of our involvement in TAGDV. In a way, TAGDV is my mother (పుట్టిల్లు) in the US. It took me in, put me on stage, recognized me as a writer, entrusted its newsletter and a couple of special souvenirs for me to edit and publish, introduced me to some great and wonderful people - in short, made a man out of the boy! Thank you, Prasad garu!!

All in all, I count my blessings.

I also realize my limitations. Yes, 2020 is the year that certainly taught all of us our limitations, if only we are willing to open our eyes and read the lesson.

Hope for a better tomorrow. That's what keeps us going. I want to be a better person, a better husband, a better writer, a better citizen, a better human being. Tomorrow. Next year. That is the allure of the future. A promise of adventure. A potential for improvement. In one word, Hope!

Lavanya said…
Wonderful andi.. this reminds me of Nike ad “you cannot stop us”... looking forward for your next piece of work
January 4, 2021 at 4:07 PM